The seamless connection between UK R&B act Loose Ends and the title of their signature hit may be a coincidence. Still, the two phrases make for an evocative pairing. With smooth organ, early sampling, subdued percussion, and sultry vocals, 1985’s “Hangin’ on a String” begs comparisons to fellow nuevo-soul act Sade.

While they may never have reached the level of Sade, Loose End’s watershed moment made an impact. “Hangin’ on a String” hit No. 13 in the UK and No. 1 on the US Billboard R&B chart. An industrious trio, Loose Ends started in early-’80s London. From there, Carl McIntosh, Steve Nichol, and singer Jane Eugene earned a prestigious label deal with Virgin Records, distributed in the United States by MCA.

The hit was a product of its time to be sure. Listen to the silky, interwoven co-ed vocals and syncopated bass line. “Hangin’ on a String” serves lowkey hooks that bring to mind UK R&B contemporaries Simply Red and Five Star. The sonic resemblance to Five Star makes sense; the Loose Ends team produced tracks on that act’s debut, including the hit “Let Me Be the One.”

Something funky permeates Loose End’s masterpiece: a subtle spin on the pop-soul of its era. The TR-808 pattern at the center of “Hangin’ on a String” elevates the moody groove from the band’s jazzy peers. The track begins with a descending tom pattern—pure 808—before the distinctive chatter of the cowbell appears panned to the right.

The beat is an elegant device here, one of the most categorical uses of the 808 committed to wax. Unlike future acts who’d amp up the sub frequencies of the kick to improbable levels, Loose Ends use the beat as a soft pillow. “Hangin’ on a String” isn’t quite a ballad, but the bubbling 808 contributes to a mood of quiet introspection.

As happens with hits of yore, everything old becomes new again. In this case, “Hangin’ on a String” appears in an unusual setting: gaming franchise Grand Theft Auto IV. The song plays on The Vibe 98.8, a radio station within the title’s crime-ridden universe. Despite the song’s inclusion in that gritty, invented world, make no mistake, this is UK R&B track is a polished gem.

“Hangin’ on a String” tune would have been an unlikely hit in the ’90s or ’00s, when nu metal and brash hip hop reigned. But this is a different time. Nowadays, we see a resurgence of the “Quiet Storm” format. (The phrase borrows from Smokey Robinson’s 1975 album of the same name.) Spearheaded by H.E.R., DVSN, and Sabrina Claudio, today’s mellow wave even includes Drake’s softer output.

"You, you've got me hangin' on a string now
Am I your plaything?
You never told me you were waiting, contemplating"

The full title of Loose End’s classic is actually “Hangin’ on a String (Contemplating)”. The word in parantheses isn’t tacked-on. That haunting refrain supports the main hook, imbuing the track with a sense of hushed yearning.

Now, it’s 2020, and we’re all contemplating. It’s a year when we have less control than ever and increasing concern about the state of the world. We’re all at loose ends, each one of us hanging by a string.

Find this “Hangin’on a String” pattern poster and the rest of Rob Ricketts’ colorful, collectible “Program Your 808” designs at his online store. 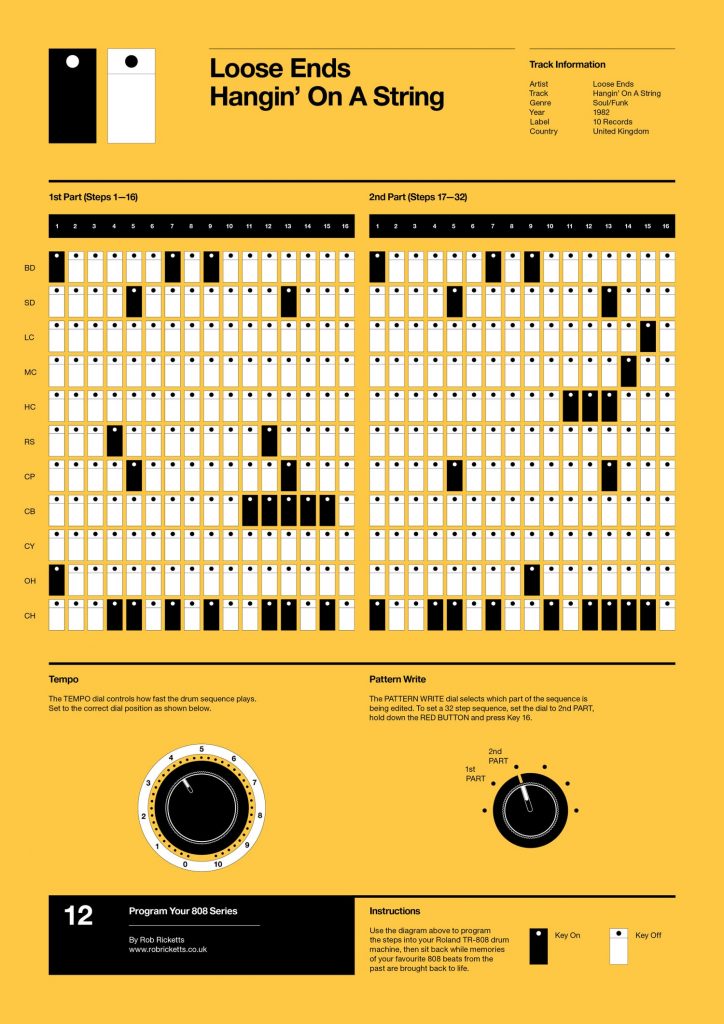 Ari is Global Editorial Content Manager for Roland. He lives in Seattle with his wife and dog and enjoys the woods, rain, and coffee of his region.

Sound Behind the Song: “Rublick’s Cube” by Drexciya

Sound Behind the Song: “Autriche” by Autechre