Few players in the history of rock music can claim the influence that Neil Peart earned over his career. Peerless in his technique and poetic in his storytelling, he shaped the course of musical history for over four decades with Rush. When Neil passed in early 2020, the world lost an artistic inspiration. For his birthday and in remembrance of the Professor’s immeasurable drumming contributions, we journey back to revisit the Time Machine.

An Icon with a Trademark Set

It’s safe to say Neil Peart’s Time Machine Drum Kit remains one of the world’s most recognizable hybrid drum kits. This kit is not only an instrument—it’s a work of art.

As the drummer for the iconic Canadian trio, Neil Peart’s drum kit was always larger than a typical standard-size set. Over the years, it grew to include traditional orchestral percussion and acoustic sound effects. These became trademarks for both Neil and the band.

However, during the ’80s—out of adventure, necessity, or both—the kit grew to include electronic percussion. The kit became a “Hybrid Kit’ featuring a combination of acoustics and electronics. In 2001, a phone call initiated a decades-long relationship between Roland and the tightknit drum team of Neil Peart and Lorne Wheaton.

At that time, Neil’s kit included the first generation of V-Drums, the TD-10 module, and V-Pads. Incorporated into the setup for 2002’s Vapor Trails tour, the V-Drums were new to what Neil called “the dark side” of his massive rotating kit. They supplied him with a fresh sound palette and interface to recreate some of the classic sounds from Rush’s catalog. Not only did Neil use the V-Drums to trigger sounds during the setlist, but they became a drum solo feature.

Of his choice, Neil said, “After checking out the current generation of electronic drums, I settled on the Roland V-Drums. The pads are sensitive, resilient, and satisfying to play, and the sounds are high-quality, nicely varied, and versatile. The complete rig is useful, easy to use, and most of all—fun.” 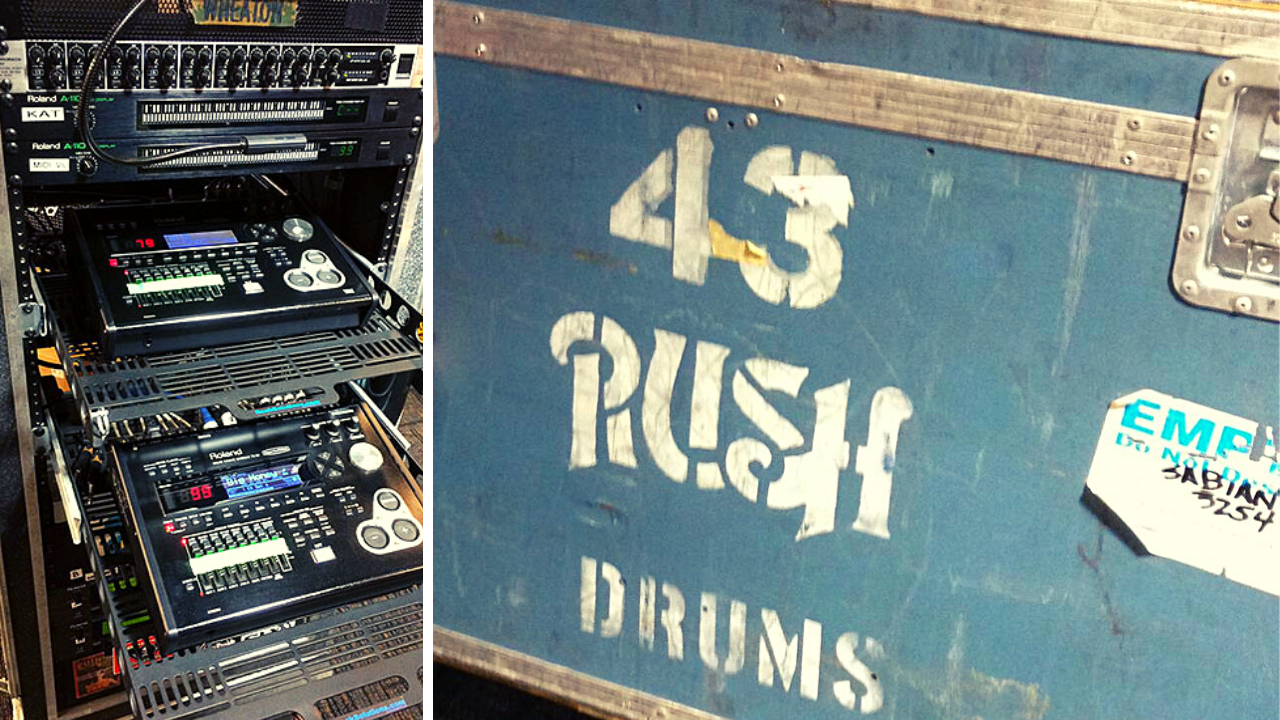 The Rugged Road with Rush

When the TD-20 V-Pro Series V-Drums arrived, Lorne and Neil planned to upgrade the kit in preparation for the RUSH R30 tour. Their evolution continued with a new focus on the electronics performance and triggering for the live show and solo.

Lorne’s role was to oversee the kit, with an “office” just behind and stage left of the drum set tucked stealthily behind Rush bassist/vocalist Geddy Lee’s backline. This office included a rack with two V-Drums modules, TD-20s, the Roland A-110 Rack Mount MIDI Display Units, Roland XV-5080 Sampler/Sound Modules, mixer, and more.

"It’s the combination that gives me the dynamism of acoustic drums and then a virtual orchestra of sounds that the electronic drums can offer."
-Neil Peart

Neil’s V-Drums connected directly to the modules, then to the rest of the rack gear via MIDI, and all audio output to the house and monitors.

Lorne commented on the reliability of the setup. “The gear in the rack has stood the test of time and the road for over 10 years, with no failures.”

Following a few more road jaunts, it was time for a new kit. Created for the Time Machine and Clockwork Angels tours, the Time Machine hybrid kit was an over-the-top steampunk-themed set. Under the hood was Roland’s 3rd generation of V-Drums: the TD-30 SuperNATURAL powered V-Drums technology. These introduced even faster, more accurate, and more dynamic triggering into Rush’s show.

“I first introduced Roland V-Drums into my setup in 2001, during the writing and recording of our Vapor Trails album,” said Neil. “On the subsequent tour, they became a fixture in my drum solos, as well as to trigger samples throughout our live show.” 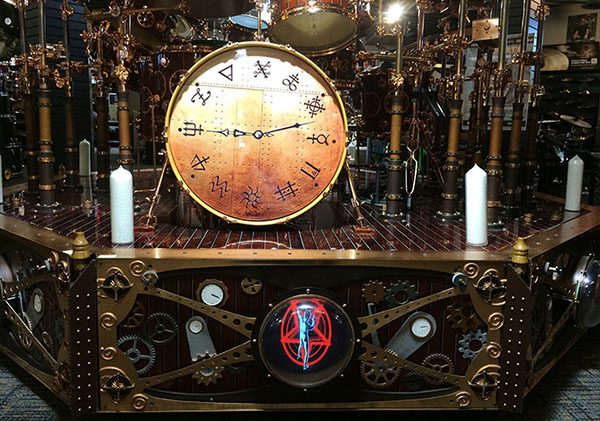 With a player like Neil, the ability to shift his approach took on heightened importance. Throughout his life, the drummer was consistent in his desire to expand his repertoire. To that end, Neil famously recommitted himself to drum lessons well into Rush’s career, even integrating traditional grip into his style. Hybrid drums reflected his desire for constant evolution.

Neil recounted his myriad applications of the kit. “I also played the V-Drums on our 30th Anniversary tour in 2004, on the Snakes and Arrows album and tours in 2006, 2007, and 2008 (thus they appear on the Rush in Rio, R30, and Snakes and Arrows live DVDs and CDs), and now on our 2010 Time Machine tour. Over the years, the V-Drums have continued to improve in touch-sensitivity, sound quality, and variety. I still find them not only fun to play, but a great creative addition to my percussion world.”

A Continual Source of Inspiration

Speaking to the CBC in a video segment called Neil Peart’s Guide to Neil Peart’s Drums, the drummer described the unique kit to viewers in great detail. Neil concluded by saying, “It’s the combination that gives me the dynamism of acoustic drums and then a virtual orchestra of sounds that the electronic drums can offer. Each of them is a tool as part of the sound palette to be applied to do the job necessary.”

There will never be another player who did the job of drumming like Neil Peart. His power, precision, and meticulous craft remain the stuff of legends. The lyrics he crafted gave wings to countless listener’s imaginations. Luckily, future generations of music lovers will always have the Rush discography to inspire them. Fly by night, Neil.

Chris Wood of Bastille: Hybrid Kits and Beyond

Chris Wood of Bastille: Hybrid Kits and Beyond

Jay Weinberg of Slipknot and the VAD506